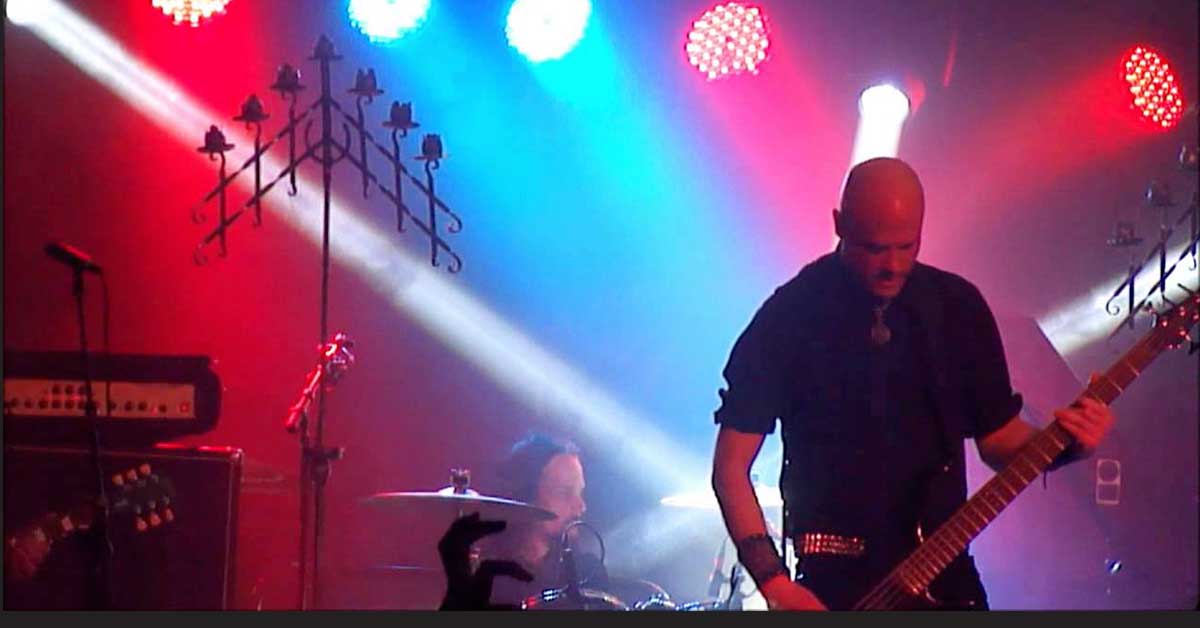 “Not only is the dark side of life more honest and beneficial, it is the most interesting because it is remarkably misunderstood”

If your music were a landscape, what will it be ?

Not the answer you are looking for, but the aftermath from the nuclear bomb dropped on Hiroshima at the close of World War II.

If your music were a movie?

Jacob’s Ladder (Jacob’s Ladder is a 1990 American horror film written by Bruce Joel Rubin, directed by Adrian Lyne and starring Tim Robbins, Elizabeth Peñaand Danny Aiello. The story centers around Vietnam veteran Jacob Singer, whose experiences both prior to and during the war have resulted in strange flashbacks and bizarre hallucinations that continue to haunt him in his everyday life.)

You use images projections live. Are these images a perfect reflection of what your music is?

Actually, we rarely use any sort of projected images or movies live. We have played with a projector twice, and those were shows separated by 2-3 years. When we do have the opportunity to use them in a live setting, those images are absolutely an extension of the music itself. It reflects the disturbing nature we attempt to create when playing these songs on stage. I don’t believe they are a perfect reflection of what our music is to us, but a fair representation.

Do you feel much more as a live band nowadays than ten years ago?

Yes, we are an extremely different band than we were ten years ago on stage. Although we always poured our hearts out in the music when playing live, but I don’t believe we emphasized the importance of preparing and coming up with different ideas for a show. That is with good reason too because we were becoming quite frustrated with playing out. Although we would put 100% into every performance, and would rather have 10 cult fans as opposed to 200 fair-weather-fans, we grew tired of hauling all the equipment, practically killing ourselves to get to a show, only to be treated like complete shit by the various promoters. It wasn’t fun to us anymore, which meant we would simply create a set list, rehearse that set list a couple of times and that was it. … The past few years, things have changed dramatically. We love playing live, as well as being able to meet fans old and new. We enjoy being able to hang out with each other since we are all good friends even outside the band. We don’t simply create a set list and go. We are constantly trying to come up with new ideas to not only improve our live sound, but are always looking to create and or enhance the visual side of the show. We are also a tighter band and better musicians than 10 years ago. Factor in the increase in attendance at out shows now and how we’re no longer treated by promoters like panhandlers. The shows are just becoming more enjoyable, meeting up with and playing with some incredible bands.

If you should describe in words what Funeral Doom is?

I believe Funeral Doom is the representation of the general public’s fear of the inevitable. It’s pace is slow, like a funeral procession except there is no need for any visuals to be involved; its music that allows you to create the melancholy within the confides of your mind. It’s music to be absorbed.

Despair, misery, fear, anger, chaos, pain, death… Do you thing these words fit with what your music is?

I do believe those words fit the music quite well as a condensed definition.

Are your albums covers a perfect image of your music?

I think they are an accurate representation of the music, especially at that time. I would never say « perfect » since the word perfect by definition is impossibility. Another reason for avoiding that word is, as time moves on and the album has been out for a bit, we tend to scrutinize those covers, finding elements that could have been done different.

Musically speaking, describing sadness and darkness seems to you much more interesting than focusing on happiness, if ever happiness is part of our world. Is the dark side a much more important source of inspiration?

It is simply because I believe there is honesty in sadness and darkness you cannot find within happiness. If everyone in this world is happy, there will never be a need for improvement within yourself or the outside world. The darker side of life is what allows us, what drives us to become better individuals. Look at the religions of this planet. Each religion and its sole purpose is to experience and bring about their own happiness. To achieve this happiness they inflict pain and suffering onto others. It has created majority of the wars throughout history and for what, the promise of everlasting bliss, and eternal happiness in the afterlife? As religion has its basis in happiness, wars are a solid representation of the darker side of life; as we know, warfare is the mother of invention. Another example would be the mythological stories of God and the devil. Apparently, God is based around happiness, yet if you disobey Him or Her, you are punished. Meanwhile, there are no gray areas when it comes to the devil. The tales are of the devil disliking mankind, and certainly making it very clear and honest. So, which is the most hypocritical? Not only is the dark side of life more honest and beneficial, it is the most interesting because it is remarkably misunderstood.

Can Evoken be described as a bridge between the violence of Slayer and the psychedelic inspiration of Pink Floyd?

It can be described however the listener wishes to hear it as. I don’t believe in interjecting my belief as to where the music can take you, or where the musical inspiration may have come from on any particular song or riff.

Is your music an accurate vision of who Evoken is as far as his members are concerned?

I think it’s an accurate vision as only part of who we are. Each one of us has our own visions and characteristics unique to and from each other. I believe Evoken serves as a form of therapy for us and gives us an outlet to express those negative elements we all have in our lives.

Can your music inspiration come from books, poems or images?

They actually come from all 3. We don’t limit ourselves to only finding inspiration in just music or just metal music. Our influences are quite eccentric and vast. I absolutely believe that’s why we are able to continue to this day creating with just as much conviction today as we did on day 1 of Evoken.

Can you tell us about the creation part? Do you work all together, playing live or is it much more something individual that you share with the others?

We don’t have a set way in which we write new music. Everyone has a creative hand in this band, and each member contributes with no restraints on what we can and cannot do. It can be one guy coming to practice one day with a riff or several riffs, playing and showing everyone the riff. Then, once everyone has heard it or played along with it, we’ll either continue to play that one riff over and over again and try to add more to the riff, or if we all like it, but one guy doesn’t, we’ll work with it until everyone is satisfied.

If I feel depressed, is an album of Evoken much better than a Prozac?

That is entirely your decision. For me, I would choose neither.

Evoken started in 1992. When you look back in the mirror, what images remain in your mind?

The nights recording the first Ep Shades of Night Descending. Images of all of us working at the board or the dark and quiet roads we would drive on returning home after being in the studio majority of the night, while listening to each day’s result.

On Atra Mors Brian Sanders is playing the cello, an instrument you hadn’t used since Antithesis of Light. Do you think that this instrument brings a much more epic dimension to your music?

Absolutely. I have always admired how a cello can shape the atmosphere of a riff. I do enjoy all string instruments, yet hearing a cello again behind our music was a decision we made very early on. We wanted the atmosphere and emotion on these songs to overwhelm you from the first note. On their own, they do just that, but adding the warm and sinister sound a cello makes would really take those songs to the next level in fear, hatred and darkness.

Working to make a living as you do, living as men and not as rock stars, do you thing that it helps to remain creative and full of inspirations?

I do because there isn’t the pressure that comes with this being your single source of income. You can take your time you can create exactly what you wish to hear, not what fans may want to hear or the record company. It would be nice to have this as our career, but I would much rather have to work a day job and keep our creative freedom than have to sacrifice that element.

If I ever go to hell, could Evoken be the music of this place?

I hope so, as long as we are not limited to only a 35 minute set.